Another day another version of Corel... We are now at the 13th version of Corel's DTP, vector and image editing suite, now spanning over two decades. Version 12 saw a number of new and innovative features, so I was interested to see what the Canadians could cram into this latest release.

Corel cites that there are more than 40 new features and over 400 enhancements, but is this enough for you to spend £149 on an upgrade or £329 on the full version?

Installation
Nothing major to report here - insert the disk and follow the prompts. Although four CDs are supplied only the first disc is required for installation, with the other three containing 10,000+ clipart, 1000 fonts and 100+ templates - this especially is a nice touch. As with the previous version there are also some useful tutorials from Lynda.com to get you up and running.

Note that you can also purchase a downloadable version of CorelDraw X3, although this does not come with CDs or manuals. Still, if you are happy with this you can save yourself around 10% of the product cost and save a tree in the process.

What's new?
For starters there are two new applications - PowerTrace and Pixmantec Rawshooter essentials. PowerTrace is essentially a repackaged version of CorelTrace 12, however the colour handling has been enhanced, even allowing you to merge different colours from the original bitmap into a single colour in the outputted vector drawing. RawShooter allows digital images to be converted to RAW format, with support for all of the major formats of different manufacturers such as Canon, Olympus and Nikon, as well as the Adobe DNG standard.

The Image Adjustment Lab is more of an applet than a fully blown app, being accessible from both Draw and Paint. It gives the usual array of image adjustments, such as tempurature, tint, brightness, contrast  etc. PhotoPaint also boast an enhanced cutout 'lab' tool, making it easier to remove backgrounds from images. Spot colour handling has been added, allowing users to create and modify images that contain spot colours.

CorelDraw X3
When you open up the main app you immediately notice the new Hints docker. Now, we all know that grown men don't read manuals, but it is worthwhile leaving this open for reference. As you click on and use different tools a suitable hint is shown - while more advanced users won't need this, occasional users who need a reminder will find this invaluable. A particularly nice touch for those upgrading from older versions is the ability to highlight changes from versions 9 through 12 - very useful! A new 'step and repeat' docker menu is also a welcome addition - previously if you wanted, say, 100 small stars each spaced 2mm apart you'd have to use the transformations menu and create a duplicate item X distance from the previous one - now you can simply specify that you want X number of items with Y distance, along with the direction. 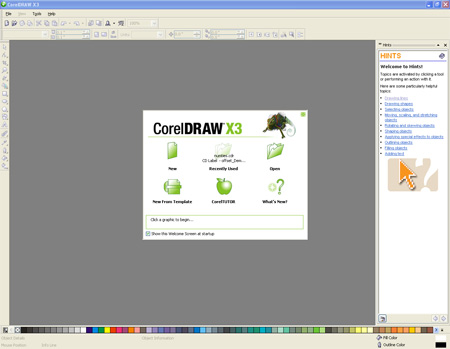 Drawing tools have been beefed up as well, with several new dockers - a rudimentary (read: basic) bevel facility, chamfer and scallop, and the ability to create more complex star shapes. While their uses may be limited at first glance their inclusion is a welcome one - if you've ever previously tried to reshape a rectangle using nodes you'll know that even the most basic of design changes can require a few minutes of work - these tools do away with that, adding further relief to your RSI-riddled wrists. 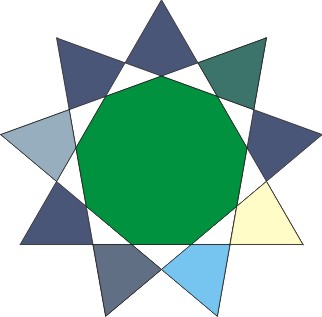 The new smart fill tool is something I've wanted for a long time in Corel - the ability to only fill a portion of a vector-based drawing. This tool intelligently works out where lines cross and let's you fill in areas that normally would need to be broken into a separate, whole object. The star example (created using the new complex star shape) is a good case in point. To create this in previous versions would have taken several minutes, but this example took only a few seconds.

Creative boundaries and interactive crop are two new features which, at first glance would not have many applications, but will no doubt save you a lot of time when you need to use perform specific tasks. Imagine drawing a complex shape which you then want to have as a silhouette e.g. for sign-making - one click will do the trick. Imagine that you also needed to crop that same object - let's say that we wanted to crop the star image above in half - previously this would require breaking the nodes down, which would be especially complex around the points. With the interactive crop you just drag a box around the area to keep.

We now start getting down to the minor enhancements, too numerous to mention, but that all add up to greater than the sum of their parts. Better text handling and font matching, the new character and paragraph format dockers, improved hyphenation, fit text to path tool, overprints preview (simulates the colour of areas where overlapping objects were set to overprint), better pdf publishing and security, enhanced colour pallete management (including Pantone transparent white)...

Some of the ancillary applications and features still lack the raw grunt of competing products. For example, I'd still use Techsmith's Camtasia and Snagit range rather than CorelCapture, but for the occasional user it is still a competent application.

Conclusion
Even as a user of version 12 there were a number of new features that draw me to X3. As a designer that provides source files to other companies I am always wary of upgrading to a newer release as this generally forces others to do the same, however in this case I would proactively twist their arm. If you put a value on your time, and you spend a fair amount of yours in front of CorelDraw then I would go as far as to say it is false economy not to upgrade to X3. For those using other systems I would encourage them to take a leap of faith, download the trial version and stick with it for a week to see if their productivity increases. I could not find anything really negative in this release. PhotoPaint is snapping at the heels of Adobe's PhotoShop, although it'll prove difficult to convert die-hard photoshoppers (myself included). But at under £330 for the complete suite (or less if you download it) it represents excellent value for money.

Pro's: Comprehensive vector and graphics suite which covers all of the bases. Reasonably priced. Enough updates to give previous users a reason to upgrade.

Con's: Nothing major to speak of. Some ancillary applications still not as strong as rival products