When it comes to satellite navigation on the iPhone there is a wide choice of apps available, although most of them have a hefty price tag associated with them. Recently though, a couple of vendors have released complete UK and Ireland systems for under £30. One such system is Sygic Aura, which boasts a powerful 3D engine. But is it style over substance and can it compete with other pricier apps out there?

Sygic Aura sells itself as being more than just a satnav for your car - it is suitable for navigation on foot as well. Unusually it also includes its own social network (rather than relying on established networks), allowing you to check up on 'buddy' location, set your status which can be seen by other (authorised) friends and allowing you to vote on places you like. Personally I am not convinced that many will be using features like that when they can text, tweet or, God forbid, call friends instead. 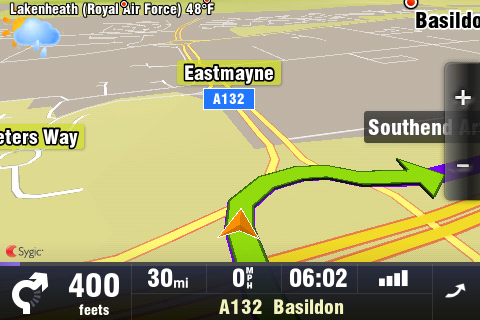 Within 15 seconds of starting the app I am at the map screen with a GPS fix. I've seen many a report (for ALL satnavs) where users cannot get a GPS fix for 10-20 minutes but I've not experienced this. Even when navigating, if I receive a call the iPhone reopened the app after the call ended (unless I dialed out) and within 10-15 seconds the software was providing navigation. I think that's quite acceptable, but of course if you get a call at the wrong time...

Visually Aura is impressive. It utilises the iPhones graphics processor to render fast refreshing 3D landscapes which do appear very fluid. The bottom of the screen is dedicated to text-based information such as direction of travel, next turn, distance to destination, current speed, time of arrival and current road. You can switch this view to a tabular list of waypoints by touching the next turn icon. To the right of the screen zoom buttons allow you to zoom in/out, although a nice feature is that the software will automatically zoom out as you go faster and zoom in when you slow down and need more detail. 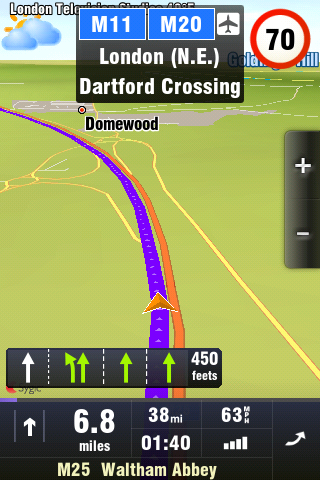 Aura includes some other useful features too. It's aware of the speed limits on many roads and will warn you if you go over a given speed - the default is 6mph over, but you can customise this, along with the warning sound. It'll also pick up local weather based on your location, although the chances are if you are in your car you'll have a fair idea of what the weather is doing - still, it's a nice touch that I've not seen elsewhere.

Lane assistance is a good feature included in Aura, and often missing on other system. As you approach a motorway the screen displays lane icons at the bottom of the screen, with the lanes you can/should be in highlighted in green. These icons could probably be made a little larger, but they do a good enough job.

One downside is the lack of traffic information - they provide traffic for Portugal only at present. Most other Satnavs have this as a chargeable extra, so it will be interesting to see how they price this in the future.

I found the interface a little clunky when trying to program locations at first. There is no clear postcode search - I found it by accident when entering a street name. Their website clearly lists that postcode search is included but you literally have to guess that you need to put it in the road name field...This is made up for a little by the fact that when you enter a city or town it then filters down the possible roads, so as you type the first few letters of the road name the list of options diminishes to the remaining possible names. You would probably find what you're looking for quickly enough using the town/road filtering - it may take you a few seconds more, but it will only be a few seconds.

There is a mysterious option called 'Community' that I eluded to earlier - effectively Sygic have built a mini social network into the software, with the biggest benefit being that you can share your location. Of course the biggest drawback is that all of your friends would also need to have the app! There are other features it has, such as messaging and events, but when most people will text, tweet or post onto Facebook I can't see this alone being a killer reason to buy this app.

With Aura's supplied databases are a series of city guides. The UK covers, Birmingham, Bristol, Cambridge, Edinburgh, Glasgow, London, Oxford and York. They provide general information about the city as well as details of hundreds of venues covering bars, restaurants, museums and outdoor activities. Each item has a quick link to navigate to, as well as phone and web links. Addition descriptions are also supplied. This is a nice touch, but again I suspect most people will do this sort of research through Google.

I've not covered what some may regard as one of Aura's biggest strengths - it is not only designed as an in-car device, but also a 'walk to' GPS. When selecting a destination you can specify whether you want drive by directions or walk to directions. For the more outdoor types among you this could be a key feature. Unfortunately I did not have the opportunity to test it out, but there are some good demos on Sygic's website.

I used Sygic Aura over the course of several reasonably long trips, and compared it against NDrive and my car's in-built Satnav system. Overall it compared favourably. It was fast to get going and, once you'd programmed and stored locations it was quick to get back to them. The lack of some fundamental features such as traffic, and the menu system search let it down, however for the price what you end up with is a very capable system for a very reasonable price. If future update fix the minor niggles Sygic could be onto a winner.