In days of old when the web was young, web developers used editors that were little more that jumped up versions of Notepad. Microsoft hit the market hard with Frontpage, and designers were blown away with the ability to create reasonably complex sites using an interface that was little more than a word processor. This was, however when the most complex area of writing the majority of sites was table layout and perhaps some Javascript.
Then Macromedia hit back with Dreamweaver in the late 1990's and the tables were turned. Overnight hardcore developers switched over, not only because it was an easier product to use, but also that it generated cleaner code.

{{mosgoogle}}
In keeping with many other software vendors, Macromedia chose to adopt a two letter suffix to the end of the product - MX - and have now bolted on the year of release, no doubt to coax developers to upgrade to the latest four digit version per year. I was one such 'coaxee'... 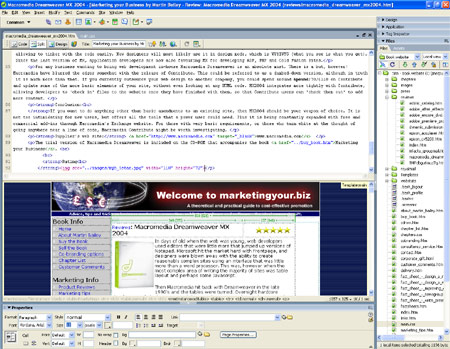 As with many new products, Dreamweaver MX 2004 (hereafter referred to as MX2004) requires activation upon installation, however one very welcome change is to the licensing. It is now licensed per USER, not per PC. This means you can have it on your main PC and laptop, but you can't use them at the same time. This is enforced physically as well as legally - the software will check over your network to see if any instances of the same serial number are running, and the most recently opened will close automatically. This is a much fairer way of licensing software, and Macromedia should be commended for this - let's hope that others follow.
The interface is not too much of a departure from the previous MX release - a bit of polishing of graphics and moving a few buttons around (which through me for a while - the close button for open windows moved!). On startup users are greeted to a quick links panel, to either open recent documents or to quickly create new ones. 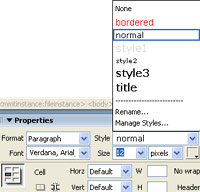 Another major improvement within MX2004 is the handling of CSS (cascading style sheets). In previous versions handling of CSS, whether they were embedded or held in a separate file, was messy. MX2004 has actually gone full swing the other way in some respects. For example, previously you might set a font to 'size=2'. Now you would set it to a pixel size. Not only that, MX2004 will create a style sheet entry (storing information such as font style, size, colour etc) either at the HEAD of the document or in the linked style sheet. This ensures that you can modify the entire look of your site by modifying one or two lines of code.
The way that tables are displayed has also been tweaked. Green dimension lines can now be displayed, giving exact pixel measurements of the table as content is added. While for some this may appear as a visual hindrance (although it can be disabled), for designers working on a graphical site where pixel precision is important this addition will come in useful.

Different types of users will gain different benefits out of MX2004. Advanced developers will probably use the code or split view more, allowing to tinker with the code easily. New designers will most likely use it in design mode, which is WYSIWYG (what you see is what you get). Since the last version of MX, application developers are now also favouring MX for developing ASP, PHP and Cold Fusion sites.
There are many other updates in MX 2004, but the purpose of this review is to gauge the software's usefulness for general business. The features above are the ones that are more likely to ease and accelerate the web design process within most companies.
Conclusion:
For any business wanting to bring web development in-house Macromedia Dreamweaver is an absolute must. There is a but, however! Macromedia have blurred the edges somewhat with the release of Contribute. This could be referred to as a dumbed-down version, although in truth it is much more than that. If you currently outsource your web design to another company, you could spend around £70/$120 on Contribute and update some of the more basic elements of your site without even looking at any HTML code. MX2004 integrates more tightly with Contribute, allowing developers to 'check in' files to the website once they have finished with them, so that Contribute users can 'check them out' to add more content.
If you want to do anything other than basic amendments to an existing site, then MX2004 should be your weapon of choice. It is not too intimidating for new users, but offers all the tools that a power user could need. Plus it is being constantly expanded with free and commercial add-ins through Macromedia's Exchange website. For those with very basic requirements, or those who turn white at the thought of going anywhere near a line of code, Macromedia Contribute might be worth investigating.
Supplier's web site: www.macromedia.com
The trial version of Macromedia Dreamweaver is included on the CD-ROM that accompanies the book Marketing your Business, along with advice on building a site in Dreamweaver.
Rating

Pro's: Industry standard. Easy user interface. Excellent style sheet handling for ensuring the look and feel of a site remains constant through every page.
Con's: One of the more expensive packages. May be overkill for very basic sites. Contribute might do the job if you don't want to get too involved.