They say a picture is worth a thousand words, and when trying to learn software this is certainly true. Lotus kicked off the screen capture software genre with its ScreenCam product, which was quickly taken over by the superior Camtasia suite. So I was interested to see Macromedia's offering - Captivate. Products such as Captivate are great for producing software demos, training programs or general help desk assistance files.

This product, formerly known as eHelp's RoboDemo, works in a slightly different way to other screen capture programs in that it does not dump every movement on the screen into a video file. Instead it stores information on mouse movements and keystrokes in what I'd describe as 'vector' format. Once captured the video/audio is broken up into a series of slides, which can then be edited. It can then be output into a Flash-based format, which is cross-platform compatible. 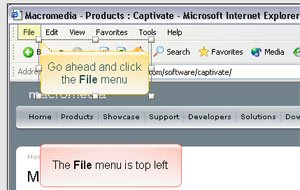 One nice feature that makes itself apparent after recording your first video is the automatic appending of speech bubbles to recorded movies. For example, if you made a short movie demonstrating how to perform a function within a piece of software, as you click around the screen a bubble is overlayed over the recording. You can then amend the text, colour or size of this bubble as required.
One of the drawbacks of other screen capture programs was that it used to be difficult to correct mistakes in either the video or audio after you had recorded it. With Captivate this is made easier because of the way it records and breaks down content. For example, if you needed to move a mouse click from one area to another, expand or contract the length of one 'slide', or re-record some narrative, all are easier to do in Captivate than they would be in, say, TechSmiths Camtasia. The timeline breaks down all actions, such as keyboard clicks, mouse clicks, voice and captions, so each can be manipulated until you are satisfied with the end result.
Although Captivate is cited as a tool for creating online interactive learning it does tend to get a bit flumoxed when you are trying to program for multiple choice answers, due to the wizard's default templates. No doubt a little fiddling could get round this if you have the time and inclination. 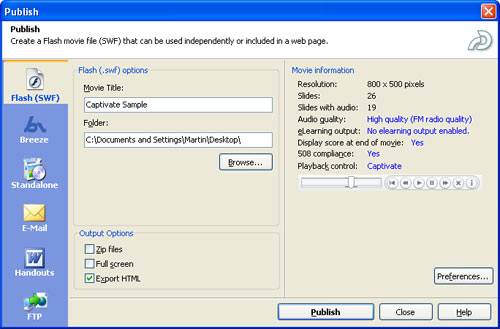 This apps biggest strength is its output formats. Not only can various aspects be configured for best compression, but you can also choose a variety of platforms to output to. In addition to standard SWF Flash format (which means you could embed a movie into a website), you export for Macromedia Breeze, standard executable files (for Windows, Mac or Linux), email or even ftp straight to a server. The only downside was that the compilation time seemed lengthy in comparison to project size, however the resulting filesize is extremely impressive - with several minutes per megabyte quite achievable with the right audio compression.
Captivate vs Camtasia
So which should you opt for? Both can be used to create a quick tutorial video, however Captivate has some strengths over Camtasia. If your output is for the web Captivate's Flash output can be embedded into a web page without problems, whereas Camtasia movies need the Techsmith's codec (if the best compression is to be achieved). Both will produce EXE files, but Captivate will also output for other operating systems. The only shortcoming of a Captivate movie versus a Camtasia movie is that Camtasia records the 'actual' screen, whereas Captivate translates mouse movement to a vector-based pattern - if your narration includes references to something you are pointing on this will not be displayed, as only clicks are recorded and the mouse movement is animated between them. For the most part this will not be an issue though.

Captivate is much more than a simple screen capture program. In fact, if you are purely looking for capturing your screen exactly as the application runs, then Captivate may not be the best product, as it does not capture the screen in realtime as other product do. But if you need an app to create demo and training videos then Captivate is pretty much all things to all men.
Supplier's web site: www.macromedia.com.

Pro's: Excellent wizard to output files into a variety of formats. Timeline-based editing allows easy modification after recording. Users can be made to interact, following a specific training pattern. You can build interactive movies that test users' skills after watching the content.
Con's: Can be time-consuming to process larger files. Expensive in comparison to Techsmiths Camtasia. Not a true screen capture program.