As a user of CorelDraw since version 3 I felt very old when I realised that version 12 had hit the streets. The version I was running was 10 (and had previously been 7, 5, 4 and 3 before), so I was intrigued to see what they could do to improve on what was already pretty much the best DTP package for the PC.
For the uninitiated, DTP takes over from where word processors leave off. While MS Word and its competitors have some DTP capabilities, a full DTP suite will allow you to design professional print ready artwork for any project - no matter what size. Got to design artwork for a full pop-up display for a show - you're not doing that in Word, so crack open the DTP software!
{mosgoogle}

The Corel Suite consists of three main applications: CorelDraw, Corel Photo-Paint and Corel R.A.V.E. CorelDraw is the main DTP application, with Corel Photo-Paint competing squarely with the likes of Adobe PhotoShop. While Photo-Paint is a worthy competitor, it probably won't force many die-hard PhotoShoppers to drop it in favour of an integrated suite. Corel R.A.V.E. handles motion graphic creation. Some additional peripheral applications are included, such as CorelTrace and Corel Capture, together with a generous amount of fonts, cliparts and photos. 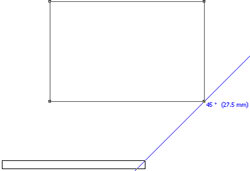 Rather than trying to justify the money for the upgrade by tweaking the interface, Corel has actually put a great deal of thought into the product, and has obviously listened to users. Repositioning items has been made much easier, with temporary guides popping up to tell you what you are snapping to, and how, for example. This alone makes it much easier to move and resize items, especially when not zoomed in at a high resolution and relying on guide rails. The dynamic guides (pictured) appear as you resize objects to show their position and angle in relation to other objects - a really useful addition.
Smart drawing is a new addition, with Corel automatically converting rough shapes into real geometrical figures. It'll automatically turn a roughly sketched circle into a 'proper' one. Again this can rapidly reduce drawing time.
Symbols are improved from the previous version. They act as a way of saving space, which is useful when designing websites. Symbols are only stored once, with a minimal overhead if you repeat the same object. You can now build up libraries of symbols and re-use them within different files. Symbols also have blue handles so you can easily distinguish them from regular CorelDraw objects.
Manipulation of graphics has also been improved, with the eyedropper now handling the copying and pasting of transparency information in addition to colour.
Corel Photo-Paint has not undergone such a radical transition, although there are some new features worth mentioning. These include the touch-up brush, similar to the heal effect in PhotoShop, more than 70 photo filters and instant red-eye reduction.
A noteworthy inclusion is the Corel training CD, providing dozens of video tutorials from respected training site Lynda.com. This is something that every software company should consider including, as users are never going to get the best out of the software unless they know how to use it. By including this Corel are increasing their users' competence level, which will potentially also reduce their support requirements/overheads. 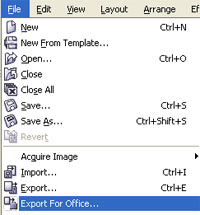 The ability to get data in and out of the applications has always been a particularly strong feature of Corel applications, and this suite is no exception. With no less than 100 file formats supported, including new Office filters and Export to PDF built straight into the 'File' menu, providing others with your masterpieces in a format they'll be able to read normally take less than 4 clicks of the mouse.
Since I started using CorelDraw version 3 way back in 1992 I've also used all of the major competing products, but have always found myself double-clicking back on that multi-coloured balloon icon soon after (although they've now changed it to a pencil, which I suppose is more relevant). Early versions sometimes proved unstable, but this is probably because they were ahead of their time and did not have the hardware to support them (try editing a full A4 bitmap in Corel with only 32MB of RAM, then waiting 20 minutes while Windows makes ample use of its swap file every time the system autosaves). Thankfully, with today's systems sporting at least 512MB of RAM and plenty of hard disc space, CorelDraw 12 zips along, even when throwing around poster-sized artwork. A good example of this was a 2.4m x 800mm banner I was working on recently - applying complex filters still only took seconds to run.
Conclusion: Power DTP users will tell you to get an Apple Mac, but if you must use a PC then Corel is absolutely the way to go. While there are other packages out there from the likes of Microsoft and Adobe, most design houses will have the latest version of Corel, making it easy to get your electronic files to print. If this is your first foray into professional DTP then you can't do much better - if you're upgrading from a previous version then the new features and training videos will make you pleased you forked out the cash! CorelDraw only loses out on the full five stars as many businesses could use MS Word (or MS Publisher, if they purchased the full MS Office suite) to produce most of their basic material, such as newsletters. Therefore, while it is the best in its class, for some businesses it might be seen as overkill. I would, however recommend that you download the trial and make your own mind up - try designing a newsletter in Word, then try the same thing in Corel (after you've been trained up!) - you'll never go back to a word processor for DTP again! For companies that only have an office suite and are looking to upgrade their graphics capabilities, then this all in one package offers a painless, hand-held introduction into the world of digital graphics manipulation.
Supplier's web site: www.corel.com - a full trial is available to download.

Pro's: Best in class. Both DTP and photo editing in one package. Many new features speed up general design work. Excellent training material.
Con's: At £300+ it may be overpriced and overkill for some. Full versions of MS Office have Publisher, which will cover the DTP aspect of users' requirements.