For many users, video editing suites such as Adobe Premiere will be more than sufficient, but for those looking to push the envelope of design and visual effects further still, then After Effects promises a variety of 2D and 3D manipulation tools and special effects that can really add a professional polish to your multimedia content.
After Effects is available in two versions - Standard and Pro. After Effects 6.0 Standard provides core 2D and 3D compositing, animation, and visual effects tools. After Effects 6.0 Professional adds motion tracking and stabilization, advanced keying and warping tools, more than 30 additional visual effects, a particle system, render automation and network rendering, 16-bit-per-channel color, 3D channel effects, and additional audio effects.
{{mosgoogle}} 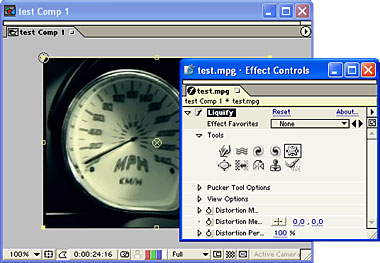 Now in its 6th incarnation, Adobe After Effects could be described as 'Photoshop for video'. It allows you to produce video content not only by adding special effects to video, but also by importing and animating Photoshop or Illustrator files. This is not just a case of sliding a graphic around the screen: Imagine having a Photoshop image that consists of several layers. Now imagine being able to animate and add effects to EACH layer separately! Adobe After Effects is supplied with over 100 filters, including new ones such as Liquify, Warp and Scribble.
As with Premiere, After Effects now enjoys enhanced performance through OpenGL support, allowing special effects to be rendered virtually in real-time. It also includes the Keylight plug-in, useful for removing solid blue/green screen backgrounds so that an alternative background can be placed behind objects. The now-common timeline makes another appearance, allowing you to quickly drill down to each control for each layer within your composition. 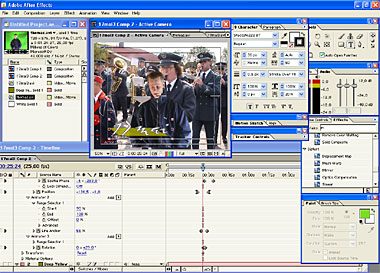 Text manipulation is probably one of the most exciting new features within After Effects, with an interface very similar to that of PhotoShop. Text can be animated along a path and you can even specify different animators for different sets of letters.
An example of some of the above features might be if you were interviewing a person and wanted to jazz up the film a little. You might film them in front of a solid background which can then be made transparent, with another movie being inserted behind them to add interest. Their name and title could then be animated to introduce them.
Conclusion
So, is all this too good to be true? For beginners, the answer is possibly yes. After Effects has somewhat of a steep learning curve - if you've never used it before don't expect to be able to create much until you've sat down and read a good tutorial book on it. Although many of the interface elements will appear familiar to users of Photoshop and Premiere, they sometimes work in very different ways. Having said that, if you're this serious about quality video production then splashing out on a book costing less than 10% of the software's cost and locking yourself away for a few hours would be a small price to pay for some of the rewards you could reap. After Effects does come with a tutorial DVD covering all of the video products, but don't expect it to go in-depth.
The 4-star rating reflects that After Effects is only likely to appeal to the hardcore video editors, and Premiere is likely to fulfill the majority of user's needs, but for visual effects it's the best in its class.
Supplier's web site: www.adobe.com