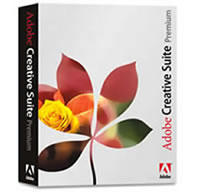 When it comes to professional graphics software for either the Mac or PC, Adobe pretty much has the lions share of the marketplace, with Adobe Photoshop pretty much the industry standard. In recent years Adobe has taken advantage of this stronghold and released suites, containing several applications. The Adobe Creative suite offers pretty much all the tools needed for creating any 'still' media, from brochures to web pages to electronic documents. The Premium suite, reviewed here consists of six main applications:

{{mosgoogle}}
Let's take a look at each application individually:

Adobe Photoshop CS
While there are many pretenders to the throne, every publishing house and print shop will have a copy of Photoshop, as it can take in (and also export) many different file formats. This latest release is not massively different from its predecessors, but continues to make the photo editor's life easier. New tools such as the shadow/highlight command offer a quick way to fix under or overexposed areas within an image - the first time you use this tool you cannot fail to be impressed. Red-eye removal is also a welcome inclusion - seasoned Photoshoppers know how to easily remove red-eye, but for novices this will make life a lot easier.
The file browser (pictured below) has also had a makeover since version 7, with the ability to edit image information as well as view images. Histogram palette improvements include colour and tone information, and a comparison with old/new histogram as changes are made.

Con's: Expensive. GoLive weak for higher end web sites. InDesign and Illustrator provide in two apps what CorelDraw does in one.