Video editing used to conjure up mental images of reels of film being spliced together with razor blades and tape, but with the advent of Mini DV camcorders, high speed firewire interfaces and even higher speed PCs it is relatively easy to pull a few clips together and create a half-decent movie. Even Windows XP is supplied with Movie Maker, which can create web or DVD quality content. But if you're serious about video editing then you need to be looking at one of the higher-end packages that allow for additional effects and titling to be added.

{{mosgoogle}}
Adobe Premiere Pro is the latest incarnation of their video editing suite. It uses a simple timeline approach to lay out your final video. Content can be imported from a variety of sources - not just AVI video files. Adobe have integrated Premiere Pro with Photoshop, Illustrator and After Effects. So, for example, if your company logo is designed in Illustrator and you already have artwork in Photoshop you can just drop them straight into Premiere. And as Premiere works with the live files you can still update the source, with changes being reflected in Premiere.
The latest version of Premiere shows several major advances over its predecessors. Firstly, Adobe are now taking advantage of higher speed processors, with Pentium 4 and OpenGl support being two major examples. This alone gives a substantial speed improvement over Premiere 6, for example, as OpenGL accelerates preview modes. The audio editor has also been tweaked, with support for 5.1 surround sound and a variety of filters. And an array of colour correction tools offer precision control over attributes such as hue, saturation, lightness, midtones and shadows.
The Pro version has several enhancements over the standard version, one of which is the inclusion of the Keylight filter. This technique was used to great effect in the Guinness 'Wild Horses' advert, which portrayed white horses leaping out of waves. In reality the horses were filmed leaping over a blue fence in front of a blue background - the Keylight filter allowed for this to be accurately masked out, replacing it with the wave background. Another useful feature is the Steadymove filter, which can produce startling results - imagine being able to remove all the camera-shake from all of your movies! This is what this little beauty will do - automatically. The Pro version also ships with several other filters that you simply drag onto clips, adjust the effect settings and render.
Creating a simple movie
Adobe Premiere Pro is nothing if not intuitive. The tool bar has only ten main icons for manipulating clips, and the timelines provide you with a visual indication of your audio and visual content. All of your movie, image and audio files are housed in the Project window, and the Monitor window allows you to preview results in real-time. To create a basic movie you simply import your clips, drag them onto the timeline, and then use the razor tool to make edits. You can have multiple timelines (useful, for example if you want to create cross-fades between video and/or audio). Adding a transition effect is just a case of placing two video clips on two separate timelines with an overlap, then dragging the transition effect between the two.
Outputting your finished product has been made much simpler since version 6. Adobe have dropped the external 'Cleaner' application in favour of several streamlined export routines, one of which is a DVD wizard. Here you can set the type of DVD format to make (e.g. PAL or DVD) with a variety of quality options - this allows you to squeeze more onto a standard 4.7GB single sided DVD. 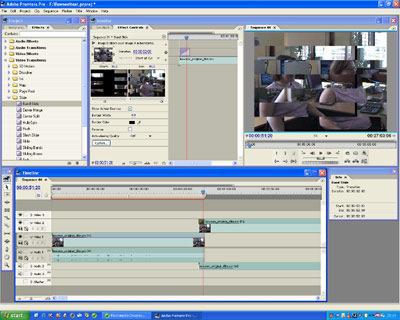 The timeline at the bottom of this screen has a transition to slide the second film over the first, which is visible on the monitor.
Speed kills
If you need to edit video, before you rush out and buy this package, rush out and upgrade your PC. On a P4 2.4GHz with 512MB Ram and PC133 hard disc a lot of time was spent looking at the hourglass as Premiere Pro chewed its way through special effects, overlays and transitions. Granted, it's quicker than the previous version on like-for-like comparisons, but if you want to take advantage of some of the new features be prepared to kiss goodbye to few extra minutes (or even hours, depending on the length of your epic) of your life.
Conclusion
If you are serious about video editing then Adobe Premiere is a must. Its import and export capabilities make it extremely friendly with whatever media you wish to produce for. Its interface is not frightening, even for the beginner (the package even comes with a training DVD to get you started). And you can create a professional, polished piece of media with some pretty amazing special effects straight out of the box. Those that want to take their visual content a stage further should also consider Adobe After Effects, but for the majority of user Premiere Pro will do more than the job in hand. The only points that stop Premiere Pro receiving the 5 star award are that video editing is still quite a niche requirement, so not everyone will need it, and those that do need it will probably also need to splash out on some new hardware to really appreciate Premiere Pro in its entirety. But if video editing is your thing then you cannot do better for the price.
Supplier's web site: www.adobe.com
The trial version of Adobe Premiere is included on the CD-ROM that accompanies the book Marketing your Business.