Over the last decade hardware prices have continued to fall while technology continues to drive forward. New devices are arriving regularly that save time and resources, or allow you to present yourself or your product better than the rest.

The Nomad Chargekey was one of my first crowd-funded purchase on Indiegogo back in 2013. The campaign was a roaring success, generating $172,000, beating its campaign target of $50,000

by 345%. So what happened after the campaign finished and the company delivered the goods? And is it any good?

The Gecko tag is one of several crowd-funded campaigns that I've personally funded, receiving 270% over-funding on top of its target of $50,000, but is it more of a gimic and does it even work?

2006 will be the year of high definition. Many broadcaster already film in HD, and the (UK) broadcaster launching their HD services in 2006, and Microsoft and Sony are furthering the HD cause with the Xbox 360 and Playstation 3 alike. So the natural progression is that people will also want to start filming in HD.

Until now high definition camcorders required the remortgaging of body parts, however Sony has launched the HC1 which comes in at the price of a high end standard DV camcorder - around £1500. 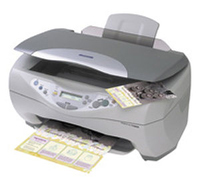 In any small office with a single photocopier there s the inevitable queue, especially when someone wants to copy a dozen reports and you only want a single copy. Many low cost scanner now provide an easy copy facility, but it is only recently that all-in-one scanner/printers have started to match standard inkjet printers in terms of price.

I can remember attending meetings 10 years ago with data backed up on floppy discs, back in the days when a floppy disc was a viable form of data transfer. This was also back in the days when business traveling meant staying in a hotel with four TV channels (in the UK at least), so little in the way of in-room entertainment. Nowadays, transporting data requires the digital equivalent of a ten ton truck, with multimedia content easily swallowing hundreds of megabytes of space. While USB memory sticks have provided excellent convenience, they are still limited to single figure Gigabyte sizes.