2006 will be the year of high definition. Many broadcaster already film in HD, and the (UK) broadcaster launching their HD services in 2006, and Microsoft and Sony are furthering the HD cause with the Xbox 360 and Playstation 3 alike. So the natural progression is that people will also want to start filming in HD.

Until now high definition camcorders required the remortgaging of body parts, however Sony has launched the HC1 which comes in at the price of a high end standard DV camcorder - around £1500.

Connections
The HC1 does well in this department, with USB (for photos), component, standard composite/audio and HDMI as well as microphone, headphones and LANC. There is also a shoe at the top for accessories, but unfortunately Sony went down the prorpietary route, meaning you have to buy their products as this is not a standard interface. Two flaps on the bottom-left side of the unit house the main incoming and outgoing connections, covering HDMI, component and the usual composite interfaces. 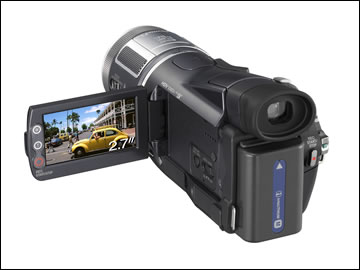 Video Quality
This is of course the crucial element - if you are paying this sort of price for a camer it has to deliver, and the HC1 does so splendidly. Colours are rich and vibrant, and the ability to manually adjust settings such as white balance and exposure is enough to keep the 'prosumers' happy. It is when you switch to HD that you see where your extra money goes. The difference can be described as looking through an open window as opposed to slightly frosted glass - the clarity (from what we are all used to with standard TV resolution) literally hits you between the eyes. Edges are much sharper and crisper, skin tones seem to be more accurately displayed and you feel much more involved in what you are seeing because it is simply more lifelike. Crucually this camera supports the higher res 1080i format. You can also record in standard TV resolution, and can select between 4:3 or 16:9 widescreen. Unlike many camcorders that profess to record widescreen (but do it at a lower resolution) the HC1E does record

Still Picture Quality
Most people would not consider using a camcorder as a stills camera as, until now, the resolution was simply not up to that of a standalone digital stills camera. While this still remains tru the HC1E does now offer an effective 3 megapixel camera, which takes clear shots. The built in flash pops up automatically as required.

Audio Quality
With the two microphones positioned well out of your finger's reach sound is rarely distorted by operation of the camera, although I'd recommend immediately switching off the confirmation beep that accompanies every screen action. You can attach an external (Sony-only) mic to the interface shoe or use the mic socket to either attach a non-Sony microphone or lapel mic. Sound recorded with the in-built microphone is more than acceptable, and the auto-levels can be adjusted to suit. 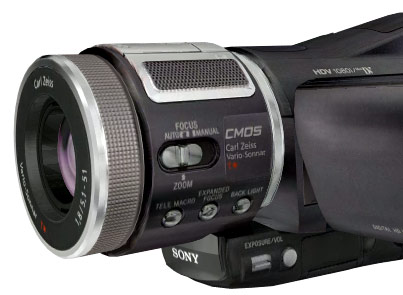 Night Mode
This is probably not a feature that many will, as switching to night mode gives a green hue to everything. The built in infrared light is good for filming targets up to a couple of metres away, however Sony do offer a top-mounted IR light that will extend this to 30m, which actually turns this into a great surveilance device!

Build Quality
The unit is sturdy, and weighs in at a not too heavy 780g including battery. The zoom ring has a quality dampened feel to it, which gives you the impression that performing manual zooming would be much better using this than the tiny lever positioned on the top. One of the dafted points of this camera, however, is that the tape ejects from the base of the unit. So, if you have the camera on a tripod you have to disconnect it to change tapes! The unit is supplied with a lens hood to help filter out side sunlight on the lens, and additional lenses or filters can also be attached to the Carl Zeiss Vario-Sonnar lens. 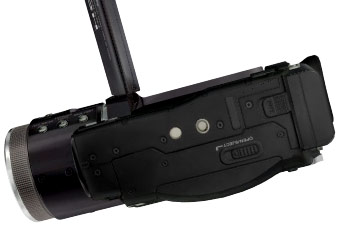 Battery Life
This is one of the achilles heel of the camera, although it can be rectified if you are prepared to throw cash at the problem. The standard battery has a quoted life of 80 minutes, although in reality it is likely to be closer to half of this (with stop/stars, opening/closing the screen etc). You can buy two higher capacity batteries, which will give you up to 5 hours of continuous recording, however they do make using the viewfinder a little difficult as they add a couple of centimetres to the back of the camera.

In use
The unit is usable within around 6 seconds of switch-on. The record/start/stop switch is used to switch between camcorder record, playback (of both tape and memory stick duo) and still picture recording. To cut down on the number of buttons Sony opted to include a touch-screen for almost all controls. While this does make for an uncluttered exterior it does increase the potential for camera shake while you change settings - it is amost impossible not to move the camera while touching the screen. There are two ways around this - use the supplied remote control or use one of Sony's tripods, which have start/stop and zoom controls on the pan lever. 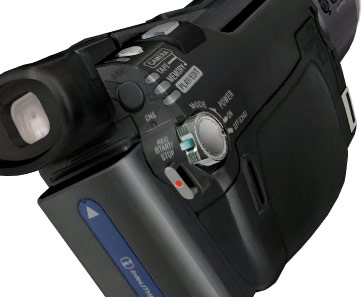 A number of standard AE modes are available, such as spotlight, portrait, beach & ski, although the auto exposure mode proved more than adequate in both indoor and outdoor conditions.

In addition to control over features such as focus and white balance a number of digital effects are also included, such as cinema effect, still, flash, trail and old movie. Most will opt not to use these in favour of applying effects during the editing process, but their inclusion is a welcome one nonetheless. A more interesting and useful option is the shot transition option - ever wanted to focus on a mountain and then refocus to a flower in the foreground? Or perform a programmed zoom from one point to another? Now you can with the shot transition option. Just program in where you want the focus and/or zoom to start and finish and hit the start button.

Conclusion
Aside from a couple of nags this camera has everything that the keen amatuer would want. It has all of the connectively you would require, a good selection of peripherals from Sony and a good solid body with output quality to match. The touch-screen, battery life and tape location add a black mark, but the first two can be overcome easily enough and you may not care about the third. At £1500 this may be at the high-end for those just wanting to record the kids growing up, but as a semi-professional capture device there is currently nothing else to compete other than high-end DV camcorders. With Sony's next HD camera costing twice this you are literally left with no other HD choice in this price range, however if you part with £1500 for the HC1E you will not be disappointed.