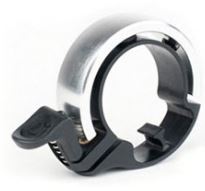 A bike bell is just a bell, right? Is it worth spending £20 on a new one? The OI bell not only looks and sounds different to traditional bells, but it also frees up space on your handlebars, which may be important to you when trying to cram as much technology on there as possible.

The OI does not take the traditional shape of a bike bell - it's essentially an outer ring attached to the inner ring mount that is tightened around your handlebars. Originally funded on Kickstarter by Australian bike accessories company Knog. at first glance you would not even recognise it as a bell when mounted.

As you would expect at this price point the quality is good. At first I was a little concerned that I'd have to put undue stress on the mount ring when sliding it over the bars, but there were no issues. The bell is made from a high grade metal - aluminium I believe - and comes in black, copper, silver and brass. It's also available in two sizes - 23.8mm and 31.8mm diameter.

This is a fairly straightforward affair. I removed my old bell, which required a screwdriver. The OI uses a small hex bolt, but a hex key is provided in the box. Once you've undone the hex bolt simply slide the OI over the handlebars. There's plenty of flex in the plastic mount, and they've even designed a cable management system into it so that your brake and gear cables can be tucked tightly against the handlebars. I didn't need to use this though, as my cables are more front-facing and don't get in the way of anything else. Tighten the hex bolt (but not too much) and it's done. All in all I spent about 3 minutes in total, including the removal of the old bell.

On my bike the previous bell had a larger diameter mount, took up a greater width horizontally on the bar and was mounted closer to the centre, meaning that I had to take my hand off to ring it - hardly convenient when the reason you will invariably want to use it is when making your presence known to a possible hazard. With the OI I was able to mount it much closer to the handlebar, and therefore much closer to my thumb.

One of the big selling points for the OI is its sound. The company proudly shows on their website the different types of materials they tested in order to get the right sound and it does indeed sound much purer than your run-of-the-mill dull bell. The note hangs in the air much longer, which must be attributed to the quality of metal used.

In the example below I tested my original bell followed by the OI. The difference is quite stark, with the OI appearing louder and longer, as seen in the sound graph below:

If freeing up space on your handlebars for lights, phone mounts etc. is important to you then the OI will deliver valuable centimetres. My old bell was around 45mm across - the OI measures just 15mm. Twenty quid might seem a bit pricey for something that simply goes 'ding', so on price alone this product may not appeal to some. But if you are looking for something that is discreet, distinctive, stylish and more practical than traditional products then the OI fits the bill nicely.