Polk may not be a brand that is immediately familiar when considering a Bluetooth speaker, but they are releasing an interesting range of devices. The Boom Swimmer Duo is a small, rugger, portable speaker with a twist – literally - whose sound belies its diminutive size.

When you first look at the Boom you’ll be struck by its weird shape. The cylindrical speaker has what can only be described as a tail sprouting out of one end. This flexible appendage can be bent in any direction. Shape it into a stand to point the speaker upwards, or wrap it around a rucksack strap to have music on the go. 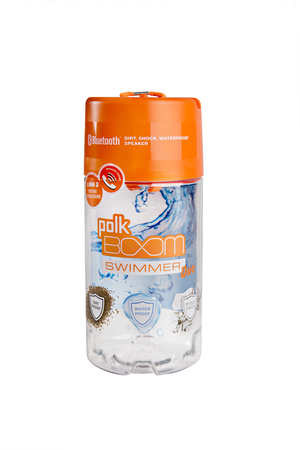 The speaker is supplied in a hard plastic cylinder aimed at the retail market. Unscrew the lid and remove the tray holding the charging cable and instructions and the speaker is encased in clear plastic within. Underneath the lid of the retail packaging (which I missed when I first opened it) is a suction cup. Unscrew the tail and you can replace it with the sucker, meaning that you can stick the Boom onto surfaces such as glass or ceramic tiles.

When you power on the Boom it automatically goes into Bluetooth pairing mode, so just open the Bluetooth settings on your phone, locate the Boom and you’ll be paired up in seconds. When you power on or off the unit it plays a short jingle, which is a little on the loud side – but at least you know it’s working.

There are just four circular buttons on the Boom – Power on/off, Plus and Minus buttons (for both volume up/down or track forward/back) and a link button for connecting another Boom Swimmer – more on this later. 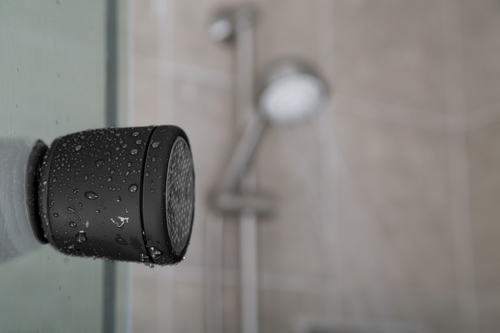 From the outside the Polk is sheathed in rubber, which not only absorbs shocks but renders the unit both dirtproof and waterproof to IPX7 rating – that’s up to 3 feet of water for 30 minutes in laymen’s terms. It feels pretty solid but is not overly heavy, weighing in at 180g. Size-wise the speaker itself (minus the attachments) measures 65mm x 65mm x 56mm, so is pretty easy to hide in a bag somewhere, or use the tail to wrap around a handle. When you unscrew the tail or sucker there’s a small rubber cover that protects the micro-USB charger port and 3.5mm jack.

Quality and more specifically the loudness of the Boom speaker are surprising. The sound can easily fill a room and has a depth and bass that is unexpected from such a small device. To put it to the ultimate test I let it loose on its target audience – teenagers! All were suitably impressed with the volume, and its unusual styling also received approval, given the range of ways that it could be used. It’s ruggedness was also put to the test, and it survived without a scratch.

The stated battery lifeform the internal lithium battery is 8 hours, with 2 hours charging time. While I was not able to accurately test the battery life over a single usage period it did seem to go a long time before it gave out, although I think 8 hours is optimistic – I’d say 5-6 is realistic. It takes power from the now-ubiquitous micro-USB socketed cable, so you should be able to charge it anywhere. 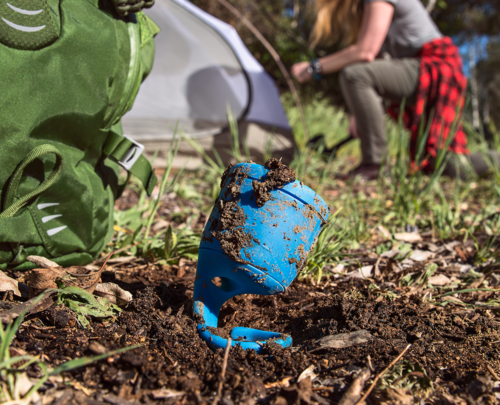 One trick up the Boom’s rubberised sleeve is that if you buy two of them you can press the aforementioned link button for three seconds to connect them together, giving you instant mobile stereo sound. Whilst that does double the price up it will give it one up on many of the more rugged speakers out there, most of which are mono-only. I didn’t have two to test so can’t comment on how well this works.

The Boom Swimmer Duo is not the cheapest speaker out there, setting you back around £50 (or £100 if you want stereo sound). However, it has enough quirky features and styling that it might well fit into your lifestyle better than the more traditional boxy units that most companies are pushing out. Being supplied with two stand types increases its flexibility – whether you want it stuck on the bathroom wall or wrapped around a deckchair arm – and couple that with its impressive sound quality it’s quite a compelling option. One slight word of warning – make sure the sucker is very clean as otherwise the unit can drop after a short while. In my experience if it stays on for a minute it’s not going anywhere, and if it falls it’s well protected anyway.