In recent years home security products have dropped both in price and ease of installation, so keeping an eye on your property from wherever you are has never been simpler. This review of the Y-Cam HomeMonitor HD Pro also walks you through the installation process.

I selected the Y-Cam HomeMonitor HD Pro as it includes night-vision/sound and the company also provides seven days of rolling cloud storage. The unit is made of metal rather than plastic, so feels pretty solid. You can use it either wired through Ethernet or wirelessly, which makes it very easy to set up. If, say, you wanted to put this in an area that was too far from your WiFi network you can always use a powerline booster.

Let's start by setting it up. 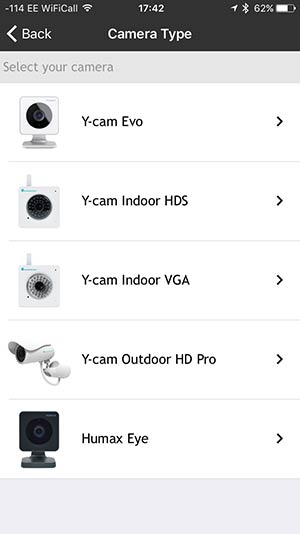 Step 1: Connecting it to the router

The first step, even if you plan to use it wirelessly, is to connect the Y-Cam to your network using the included network cable.  Most routers have four network ports, so connect the cable to a spare port and the other end to the Ethernet connector on the camera. Plug in the supplied PSU and you’ll be greeted with a red light on the front. If you plan to use the camera wirelessly then unscrew the protective cover and attach the WiFi antenna as well.

Go to the Apple App Store or Google Play and download the y-cam app. Create an account and when prompted enter the camera ID, which can be found on the front cover of the manual. Once the app can see the camera over your wired network you can enter your WiFi settings for future use. When you complete the setup you’ll be able to test your camera indoors via your phone. I’d also recommend taking the camera out to where you plan to mount it to ensure that it can still access your wireless network, as otherwise you may have to invest in a WiFi extender as well.

Decide on the best place to mount the camera. I chose to mount mine on the side of my garage wall, pointing towards the driveway.  It’s important to note that if you mount it too close to something (such as a wall) you may get too much reflection from the infra-red night light, drowning out everything else.  Drill a hole thick enough to get the power cable (and Ethernet, if you’re using it) through and then drill two smaller holes left and right to mount the base plate. Plug the power cable in, making sure to push it inside the weather-proof outer sheath to give it a good connection. If required, plug in the Ethernet cable as well. Finally, push the camera onto the base plate at a 45 degree angle and twist it straight to lock it in place. Add in the stand cap screw to prevent anyone from quickly unmounting the camera. 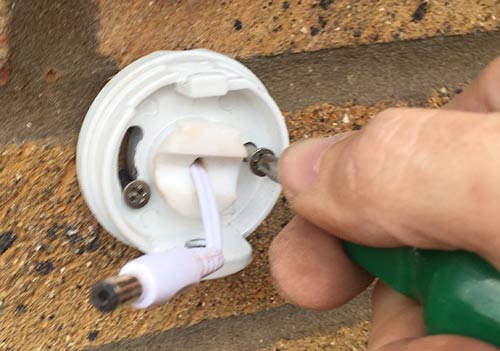 Now that your camera’s mounted you can simply power it up. It’ll either use the wired cable if connected or connect to your wireless network. In under a minute the LED will change from solid red to flashing red, followed by solid green. If you’re standing right in front of it you may notice it change to flashing green – this means that it’s detected movement and has started recording.

The next step is to configure the camera’s sensitivity and notification settings. There may be areas that you are not concerned about monitoring, such as a fence, and you don’t want false alarms from, say, wildlife or passers-by. You can drag a box around the area to record, with the boundaries acting as a digital trip-wire – if anything passes it and moves within the rectangle then the camera will record and upload footage. Sensitivity can be adjusted, which I found useful as even insects and rain appeared to trigger recordings.

Notifications can be as subtle or as intrusive as you wish, either being pushed as notifications to your phone or via email. I initially set mine to notify me via alerts on my (iOS) lock screen but while getting the right sensitivity settings I disabled this in order to not get alerted at 4.23am by a passing cat. When you’re notified of an alert open the app and within a few seconds you’ll see a live view with audio from the camera. The camera will automatically upload video to the cloud as soon as movement is detected and will stop automatically once it ceases. I quickly found that videos under 30 seconds were false alarms and anything longer was (thankfully) legitimate triggers such as the missus arriving home.

When viewing live footage two icons allow you to manually take video or stills. Within the app you can also view or download all recently recorded videos. Y-cam’s big plus over similarly priced cameras is the fact that they provide you a rolling seven days of cloud storage free of charge, whereas others tend to charge an annual fee. You can upgrade to two further levels of cover, which give you thirty days of recordings and other benefits such as extended warranty and instant replacement. In any case, if there is a break-in you’re likely to log in to download the video well within the free rolling seven day period.

As you can see from the (scaled down) stills below you can see the quality is good, for both day and night. 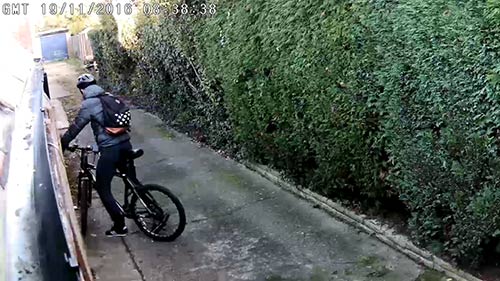 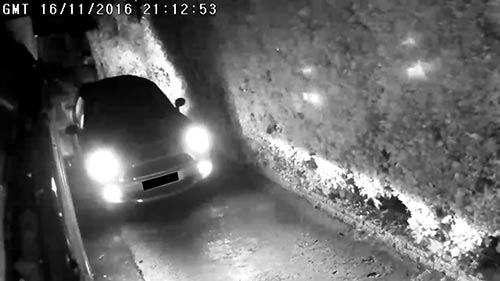 The Y-Cam certainly lives up to the promise of easy install. Ten minutes indoors registering and pairing the camera to the network followed by drilling three holes and positioning the camera and I was up and running.  Tweaking the sensitivity took a few more days of trial and error, but I’m now left with a system that can be viewed on any device. If you’re looking to secure your property with minimal effort then the Y-Cam camera gives a solution that won’t break the bank with no on-going costs.