The Nomad Chargekey was one of my first crowd-funded purchase on Indiegogo back in 2013. The campaign was a roaring success, generating $172,000, beating its campaign target of $50,000

by 345%. So what happened after the campaign finished and the company delivered the goods? And is it any good?

The ChargeKey is essentially a very short USB charging cable that can fit on a keyring. It's available in both Apple Lightning and micro-USB connectors, but I opted for the Apple version.

The campaign closed in December 2013, but the ChargeKey was several months late. This is not uncommon with crowd-funding, and I always view these campaigns a little like gambling - sometimes you win with a fast delivery and sometimes not. Anyway, the ChargeKey arrived in the Spring of 2014. It felt well-made, with the neck being of flexible rubber, allowing it to bend in any direction. It was extremely useful to know that the ChargeKey was hanging off my keyring, and there were several times when it came in very useful, also receiving admiring glances from the grateful recipient.

The ChargeKey is Apple MFi certified,meaning that it can be used to both charge and sync. Many lightning cables can only charge, as Apple have added custom circuitry which only certified cables include (and that no doubt they charge handsomely for). 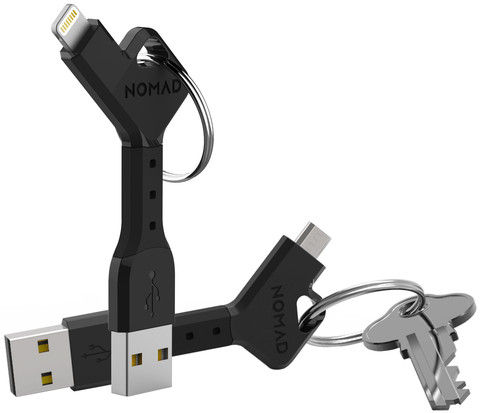 Build quality ofthe first design appeared good, however I went to use the cable about 4 months after receipt and there was clearly a loose connection as charging would start/stop each time the cable was moved slightly. Full credit to Nomad, as they responded within 24 hours and agreed to replace it for free. The only catch was that they were waiting for a second design (perhaps due to problems with the first iteration), and this would not ship until November. Oh well - I waited long enough first time around, so it would not kill me to wait again.

November came and a package duly arrived in the post with the new ChargeKey. They had made a few design tweaks, with the neck near the lightning plug being much more sturdy - I guess that's were the issues were. All was well again, and it performed faultlessly. I loaned it to a friend whose lightning cable had died, and shortly after receiving it back the two-part plastic housing around the USB socket fell off. Whether this was down to build quality or abuse on my friend's part I'll never know, but a quick mix of araldiite solved it. The ChargeKy continued to work regardless, which was a relief!

When the ChargeKey was announced in 2013 there was nothing else out there that was comparable, however a quick search on Amazon and eBay shows a number of competitors. Whether they support data syncing, assuming that's important to you, or whether the build quality will be any better/worse you'll have to decide for yourself. Only time will tell whether the ChargeKey can continue to withstand the rigours of my pocket, but despite the couple of hiccups I would not be without it. I was initially going to rate this as four stars, however the issues with build quality (and therefore potential concern for failure going forward) knock it down to three.