The Gecko tag is one of several crowd-funded campaigns that I've personally funded, receiving 270% over-funding on top of its target of $50,000, but is it more of a gimic and does it even work?

It uses low-power Buetooth 4.0 to communicate with a smartphone and includes a replaceable CR2032 battery, which lasts for about a year - that's impressive!

The idea behind the Gecko is simple. It's a small, one-inch square tag with several sensors built in that can provide a number of features, such as:

In November 2013 I contributed $40 to the Indiegogo Gecko tag - ten months later a small cardboard box arrived with my two Gecko tags. Other than the logo, the only other printing on the packaging points you to a starting page on the website, providing instructions to download the mobile app for iOS and Android. 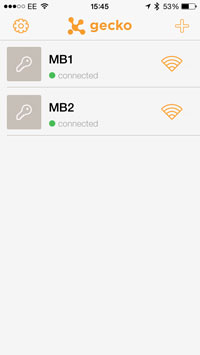 Connecting a Gecko to a device

Initially i had a problem with the Gecko app (which I'd actually had on my phone for several months prior to the delivery of the Geckos), so ended up connecting the first Gecko to my iPad first. (Deleting and reinstalling the app on my phone solved the problem). Connection is pretty simple - create an account (free),click on Add, shake the device to activate it, select a profile (e.g. camera, doorbell, pet tracker etc) and specify a name in the app.

Any registered Geckos will then be listed on the first page when the app loads. Swiping left shows a delete icon, and you can see when your devices are in range and connected.

Clicking the cog icon top left shows your user profile details, gives you the ability to change password and also set up a safety zone, which is the area whereby moving out of range of the gecko won't trigger an alert (such as at home). More importantly, it's also where you can find the full instruction manual for the Gecko. Personally I think a link to Help should be on the initial page, or at least the option to display it.

This is the first area where I was a little unimpressed. Aesthetically the Gecko looks nice, with sharp clean lines, and a small logo just below the red led on one corner. The opposite corner hosts the tag for clipping the Gecko to something else. This feels a little on the flimsy side, and I doubt that the tag on the end would survive more than a few weeks in my pocket with keys and other objects placing pressure on it. The case itself feels solid enough though, and if the plastic tag did snap I'd simply replace it with a metal one or even a cable tie, so it would not be a complete showstopper.

There are no buttons on the Gecko. Instead, it has a series of gestures that can be allocated to certain functions when the device is in a specific mode. For example, you can specify that shaking the Gecko horizontally twice can forward a music track and shaking it vertically skips back. Or you might change the actions to Pause/Play. In camera mode two vertical shakes will start/stop video recording or take a picture. This is where the Gecko came unstuck. I'd say that 95% of the time the horizontal shakes were detected, but only 10% of the time did vertical ones perform the desired action, which for me renders it pretty useless. One of the gestures is a 6 stroke vertical swipe, called an Emergency gesture, which will trigger an email to a specified email address - if my life depended on me being able to send an emergency gesture I'd not be here today! I had purchased two Geckos, and both behave identically, so it's either a design fault or perhaps the angle and rate at which I am performing the gesture. I've reached out to the developers for some guidance on this, and will update this review accordingly.

Another trick of the Gecko is that it uses Bluetooth 4.0 to track its proximity to your smartphone. This is where I see the Gecko as being more useful. Attatch it to a bag and you can set a ringfence (referred to as a leash alert), so that if you and your bag are parted your phone will alert you. You can also use it to warn if a door is opened, although this again was not 100% accurate - probably closer to 80%, but still not good enough to be reliable. The location feature is bi-directional - users can locate the Gecko tag on a map (based on where it was last left), and can also make it produce a high pitched beep to assist with location. Alternatively, if you have your Gecko but cannot locate your phone you can assign a 'Find Me' command to a gesture, which will play a sound on the phone - useful for when it slips out of view somewhere.

In their marketing material they suggest that the Gecko can be used as a pill reminder. As mentioned previously, the Gecko remembers where it was last, and has a motion detector built in. You can set a reminder, say, for when someone has to take medication, and then leave the Gecko on top of the pill box. If the Gecko is not moved by the time set it alerts the user's handset. Where this gets more useful is that this, for example, could be someone anywhere in the world, and they could receive an email if the Gecko is not moved. However, again I tested this and received no notification, so if I didn't die from not being able to instigate the emergency warning I'd be dead from not taking my medication now.

I'm a firm supporter of crowd-funding. This is my form of gambling, as crowdfunding is not without risk. So far I've funded half a dozen products, two of which have had problems, and all of which have suffered shipment delays. The Gecko should have been delivered months ago, and communication between the developers and backers has been sparse (but not as bad as others I've backed). I bought into the idea of the Gecko and in that regard I don't regret my decision.

The Gecko is a great idea let down a little by its inability to fully deliver on everything that it promises. Do I regret backing it - not at all. Many products have teething problems at the start, and crowdfunding has allowed people to get ideas off the ground that otherwise may not see the ligth of day. It may be that a firmware/app update will be able to improve its ability to correctly detect the vertical gesture, for example, and other gestures might be added which may replace the need altogether for me to perform that particular gesture.

Some of the Gecko's features, such as location tracking, work very well, and I see a lot of benefit in having one attatched to my laptop bag for example. How you rate the Gecko would depend on what your use of it is likely to be. If you wanted it for the pill box reminder or music control then I think that you'd be disappointed, but as a simple locator it works as advertised.

There are other tags using Bluetooth 4.0 also appearing now, such as Tile, so it might be worth investigating all of them and reviewing real-world experiences.