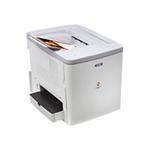 In the past the only option available for getting colour brochures was to go to a lithographic printer, which was only cost-effective for larger quantities. Then inkjets came along, but they were slow, required expensive paper and ink cartridges.
Colour lasers have also been around for a number of years, but until recently were only within the reach of high-end users. This has all changed! Several manufacturers, including EPSON now have exceptionally low cost units, of which the C900 Acculaser is one of them.
Overview
The C900 is available as a standalone or network version, although with Windows networking you can network the printer without the additional network card - this will, however be at the cost of speed. The unit is quite heavy, at 35kg, so make sure you're putting it on a sturdy surface.

{{mosgoogle}}
Installation
This is a breeze - start by removing the reams of tape and filler packaging that keeps the printer together during transit, plug it in (via parallel, USB or network interface if fitted). Then insert the driver CD and follow the instructions on-screen. Our review model was up and running within 10 minutes of unpacking.

Fitting of optional extras
Although not as straightforward, the fitting of extras such as memory and the duplex (double-sided) unit are quite easy. Additional memory requires the removal of five screws, then just pushing the card into place. The duplex was a little more complex, but still only took about 3 minutes to fit.

Running costs
When you first look at the cost of the toner units you could be forgiven for having a fit - although the black is reasonably cheap, the colour units are each three times the price. It is still cheaper than an inkjet, as each cartridge will delivery 4000 pages, as opposed to a couple of hundred. Note that the cartridges supplied with the new unit are only capable of around 1500 pages - no doubt this is to cut initial costs.

Performance
Overall this is a nice little performer. It's not the quickest off the mark, but produces good, solid colours on standard copier paper - you'd be hard pressed to get an inkjet to perform to the same level. A minor niggle is the waiting time when you first fire it up - around 3-5 minutes, plus the noises it makes - initially I thought the unit was broken!
The printer can take paper of thicknesses up to 160gsm, although it will only duplex standard copier paper up to 90gsm, so don't expect to print all of your double-sided brochures on this. In initial tests, printing on card produced a spray of toner, but after setting the paper thickness in the software driver this seemed to correct itself.
{{mosgoogle}}