Martin Bailey collected his 19th accolade for 123insight at The Manufacturer Awards ceremony as a result of a case study written on defence manufacturer Roke Manor Research. 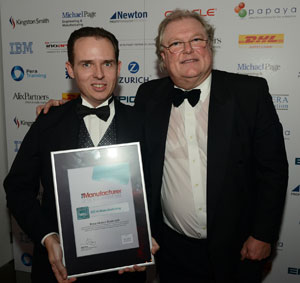 The case study detailed the demonstrable savings made as a direct result of implementing the 123insight MRP software system. This is the fifth consecutive year that the company has either received Finalist or has won an award for 123insight, with awards also being awarded for his submissions on behalf of JETCAM. 2012 also saw 123insight win Best Production Management System and two nominations in the 2012 Green IT awards due to submissions by Martin Bailey.

The awards were held on 21st November in London and were hosted by Lord Digby Jones, pictured right.

Since 2007 Martin has been submitting case studies to various manufacturing awards in the UK. Each case study is written to demonstrate the issues that prompted the company to make a change to their MRP system, why they chose 123insight, the evaluation and implementation processes and the benefits achieved after going live. All of the case studies can be viewed in the dedicated case study section on the 123insight website, along with several high definition videos.