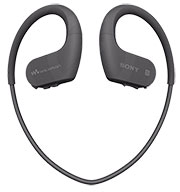 At over £100 these headphones are pricier than many Bluetooth headsets, but they have an ace up their sleeve - they are extremely lightweight, IP68 waterproofed to 2m and include 4GB of in-built memory. Does this warrant the extra cash and why would you need it?

Firstly, for those of you thinking about using Bluetooth in a pool with your phone nearby, forget it - Bluetooth won't penetrate water. At all. Therefore, a headset that combines the flexibility of a 'normal' Bluetooth headset but that can work completely standalone as an mp3 play does provide much more flexibility as to its usage. It gives you the benefit of use without your phone nearby, and the added feature of being waterproof extends the range of sports where you can use it.

The WS623 is lightweight, at just 32 grams, yet claims to provide 12 hours of playback, with a 3-minute charge delivering an hour's playback. Other features include voice feedback and ambient sound mode, allowing you to hear the world around you as well as your music. 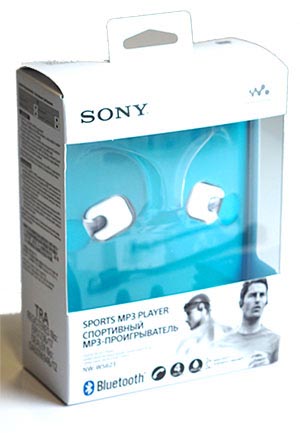 What's in the box

In addition to the headphones, there's a small charger and very short USB lead. Two packs of ear buds are included - waterproof and standard - in small, medium and large sizes. The waterproof ear buds have a thin film over the centre, which does deaden the sound a little - more on this later. Aside from this it's the usual manual, quick start guide and warranty information. It would have been a nice addition to include a case with internal pouch for the buds, as I can see many losing one, other or both types of ear buds over time.

Bluetooth setup is very straightforward. Just power on the headset by holding down the power button for three seconds - you'll hear 'Power On'. Next, hold down the AMB/Bluetooth button on the left for 7 seconds to put the headset into Bluetooth listening mode - the light will flash alternate colours. Now, just open your phone and pair in the normal way.

Transferring music to the in-built 4GB of RAM is also relatively painless. Just connect the headset to the charging cradle, and connect the USB cable to a PC. The Walkman will appear as another drive on your computer and you can simply drag and drop files over to the Music folder. I'd recommend creating subfolders, as you can double-tap the track forward button to skip a folder, which effectively means that you can create playlists by separating your music. I use it to keep podcasts in one folder and my main music in another.

Charging the headset is easy. On the underside of the left side unit are several gold connectors. Slide the left earbud onto the charger and then connect it to any USB port or charger.

There are six buttons (counting rocker switches as one) on the device. To the left is the AMB/Bluetooth, volume up/down and mode (normal, shuffle, etc), and on the right side are the on/off, play/pause and track forward/back. Usage is helped by voice prompts for certain functions, such as skipping folders and switching between Bluetooth/mp3.

When the headset is worn, the earpieces fit snugly within the ear canal. I found them to be perfectly comfortable, but I've heard that others have discomfort when ear buds are inserted for a length of time. The unit fits around the back of the head rather than over the top, which lends itself better to be used when swimming, however don't expect them to still be in place if you dive in or even kick off swiftly from the side. Anything other than a sedate push off will dislodge one, other or both, so you will need to make a slight adjustment to your swimming style.

The headset feels well-made, with the buttons giving a tactile feedback when pressed. The band that runs around the back of the head is double-sleeved where it connects to each earpiece, which gives assurance that the headphones should be able to withstand a decent amount of general wear and tear. Sony state that in addition to its IP68 rating it can also withstand temperatures from -5 to 45 degrees C.

As you'd expect from Sony, sound quality is top notch when using the standard ear buds, however it should be noted that volume is significantly reduced when the waterproof earbuds are fitted. Imagine a radio on in the background that's on medium volume. Couple that with the fact that as you lift your head in/out of the water the sound also changes (naturally) and it's a different experience altogether than when you use them in, say, the gym. This was highlighted when I listened to a podcast, where it was difficult to hear spoken words when I was breathing out under water. In fact, I actually ended up changing my breathing pattern in order to hear. I wouldn't class this as a show-stopper, but don't expect them to be as loud as you'd normally expect them to be on dry land.

The WS623 also support the FLAC high resolution audio format, although if you want to store files on the in-built 4GB don't expect to get more than a few dozen tracks, as mp3 fies are around 1/10th the size of FLAC files. The ambient sound feature works well, mixing the outside world with your music - useful, say, when cycling.

If you are just looking for a headset to use exclusively in the gym then there are plenty of much cheaper headsets that will do just fine. What you get for your money is an extremely lightweight, long-lasting and well-made piece of kit that has a much wider range of uses than most. I still find myself using an existing Bluetooth headset in the gym and my (wired) Bose noise cancelling headset for flights, meaning that I don't have to remember to change the ear buds as I use the Sony exclusively for swimming. If you can live with the slight issue of volume when using the headset underwater I can guarantee that the distraction of music will make your swim much more enjoyable and you'll probably swim a lot longer.