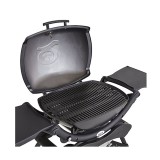 As a self-confessed terrible cook that can burn water and famously broke a blender trying to blend mashed potatones (true story!), can Weber's Q2200 barbecue help me to produce food that neither cremated or lethal?

After years of mediocre service, my charcoal barbecue finally bit the dust, so I decided to migrate over to gas. Historically, I found that charcoal barbecues took too long to light, did not produce a constant temperature and the dripping fat caused the coals to flame up. All in all, the overall experience of cooking with charcoal was not a great one - clothes stinking of smoke, me eyes feeling that they themselves had been on the grill and constantly having to move food around because of the dripping fat fuelling the flames.

i selected the Weber Q2200 as it offered a similar cooking area, and the fold-out trays left and right appeared useful for pre-cooked and post-cooked food. The unit was supplied with the permanent cart, which, if you can get it, is far better than the standard cart. This one has two wheels to the right, allowing you to move it around. Behind the plastic branded front cover is a wire tray that can hold a 5kg gas canister. I purchased a 10kg tank, which won't find underneath, but the supplied regulator and hose were long enough to reach, so no problem there...

The barbecue itself is cast aluminium. The two cooking plates are easily removable and underneath you can see the circular gas jet. Some websites list this as a two burner system, but that's not the case. The bottom half of the barbecue slopes down to the drip hole. A removable tin foil tray sits underneath to catch fat and any food that falls through the plates. The two folding trays are plastic, and initially I was a little concerned that they may not be strong enough to hold heavy dishes, but there's no issue there. It would be nice if they were easily removable though.

On the front of the BBQ is a handle, and a temperature gauge directly above it - a useful new addition over the previous Q2000 unit. 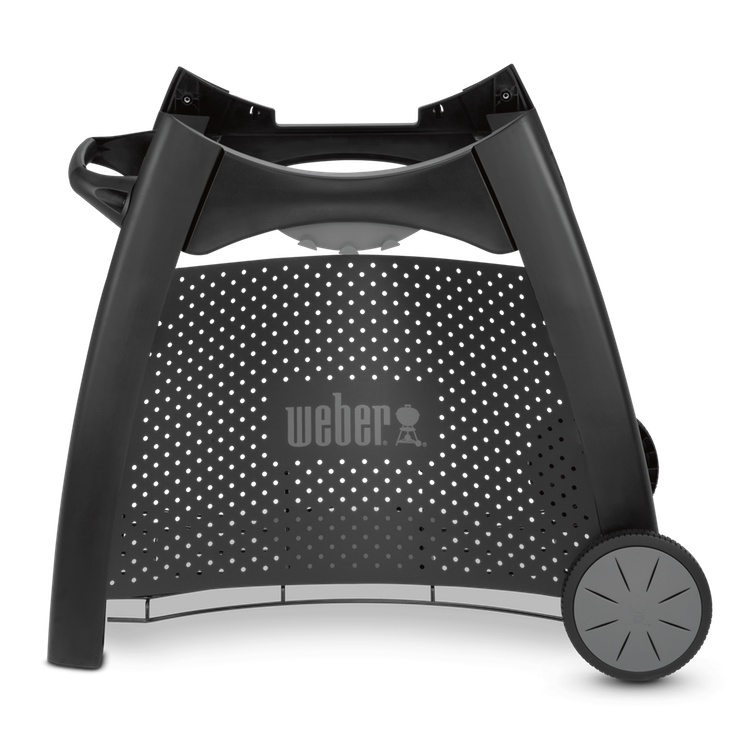 As mentioned earlier, I opted for the permanent cart. Although it's made of plastic the legs are very thick, so there's no danger of the unit being dislodged if someone were to knock it.

The design is also quite unique, which makes it a distinctive, unique addition to your garden.

It was supplied in two boxes - the cart in a larger, flatter box, and the barbecue in the heavier box. Putting the cart together takes no longer than 15-20 minutes, only needing a screwdriver and about 8 steps. The BBQ only has three steps - connecting the top to the bottom via the rear hinges, attaching the front handle and then attaching the thermometer. Then, just lift the unit onto the cart, press on your gas regulator onto your cannister and you're good to go.

As previously mentioned, my cooking skills are less than legendary, and my range somewhat limited. Nevertheless, I thought I'd throw on the majority, starting with some chicken and pepper skewers, medallion steaks, burgers and chicken drumsticks marinated in lemon and onion, with a few sausages for good measure. Unlike a traditional open barbecue the Weber is more like a conventional oven. Putting the top down keeps all of the heat inside, meaning that the food cooks more evenly. The Weber takes about 10 minutes to get up to cooking temperature and then it's just a case of whacking your food on the plates and closing the lid, only returning every few minutes to turn it.

What I immediately noticed is that there is far less heat thrown back at you, and of course no smoke at all. This makes the cooking experience itself far more pleasant. Secondly, as all of the fat drips down and mostly misses the flames there are very few flare-ups. All too frequently I had previously ruined many a burger or sausage because they'd been left on a tad too long and were almost invisible due to a wall of flames fed by their own fat.

The first couple of times the chicken was slightly overdone, but this is more a reflection of my judgement than any fault of the Q2200. However, the burgers, sausages and steaks came out perfect - evenly cooked, and without being cremated on one side by flames. The side trays are also extremely useful, and large enough to hold a couple of plates and a few sauces.

This was always another bone of contention with the previous charcoal barbecue. Due to the flare-ups there was always a lot of debris glued to the grill. With the Weber it was at a minimum, as the fat ran away. All that was left was the odd piece of food that had seared to the plates, but this was easily removed with a BBQ scraper, followed by a quick wipe with a wet kitchen towel. All done in under a minute.

I've used the Weber Q2200  more in the last two weeks than I used my charcoal barbecue last year, mainly because it's just so quick to use. Take the cover off, connect up the gas, turn it on and press the electric gas lighter. Within 10 minutes it's hot and ready to go, and with a recent spell of hot weather it has been a much more pleasurable experience to cook outdoors rather than heating up the house further with the oven or hob. I can see that barbecues will become a regular part of our dinner schedule. It also looks the part, and makes a statement that you're serious about your outdoor cooking. The only down-side is the cost - £349.99. For that price you could buy three gas BBQs from DIY outlets, but what you're paying for is quality and style.